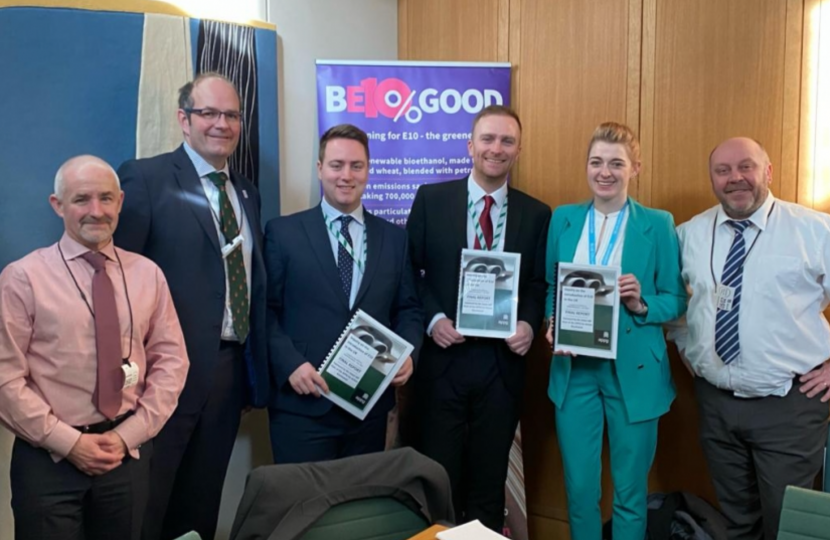 North East MPs have succeeded in their campaign for the introduction of a greener fuel, that would cut emissions equivalent to 350,000 fewer cars on Britain's roads.

The Government has today announced plans to introduce E10 petrol at pumps up and down the country, as the UK accelerates towards a greener transport future.

Dehenna Davison MP, Matt Vickers MP, and Jacob Young MP have been campaigning since their election in December 2019 for the introduction of the green fuel known as E10. All three have key roles within the APPG for British Bioethanol. The introduction of E10 in petrol station across the UK could cut transport CO2 emissions by 750,000 tonnes per year, the equivalent of taking 350,000 cars off the road – or all the cars in North Yorkshire.

This latest announcement, set to vastly decrease in the CO2 emissions produced in the UK every year, will also see a boost to job opportunities in the North East, securing up to 100 jobs with the reopening of AB Sugar’s Vivergo plant, and increasing production at existing biofuel plants including Ensus.

In a joint statement the MPs for Bishop Auckland, Redcar and Stockton South MPs said:

“While we welcome the rise in electric and hybrid cars, vehicles using Petrol or Diesel engines accounted for 83% of new registrations. This move will reduce carbon emissions and give drivers cleaner and greener choices now.

We’ve campaigned for the introduction of E10 since being elected as it will deliver huge emissions savings equivalent to taking 700,000 cars off Britain’s roads, as well as protecting thousands of jobs in our region.”

“This is fantastic news for Teesside and for our environment. In Redcar we produce the vast majority of the UKs bioethanol at the ENSUS plant and we’re exploring new technologies in this area with Nova Pangea - both on Wilton Site.

“This announcement will give them the certainty they need to continue production and create further innovation. As we emerge from the pandemic, it’s more important than ever to ensure we have a low carbon recovery and this is a great step towards that.”

“I am genuinely chuffed to hear this announcement today. This is something myself, Jacob, and Matt have been fighting for since our election. The introduction of E10 fuel will not only bring rapid environmental benefits, but it will also boost job opportunities here in the North East, all whilst including further investment in the next generation of biofuels, securing Britain’s place as a global leader in green energy.”

“We are extremely grateful to the Secretary of State for Transport and his colleagues at the Department for Transport for listening to our campaign and introducing E10.”

On the day of the announcement, the Secretary of State for Transport Grant Shapps praised the campaign by the three MPs, saying:

“New E10 petrol is a winner not just for the environment – slashing harmful emissions equivalent to taking hundreds of thousands of cars off the road – but for the North East, where it will boost the bioethanol industry and reinforce the region's claim to be the UK's green energy hub.

“Today's announcement is a tribute to the campaigning efforts of Matt Vickers, Dehenna Davison and Jacob Young, who have championed this sunrise industry since their election in 2019.”

The two petrol blends currently widely available in the UK contain no more than 5% ethanol. The introduction of up to 10% bioethanol, in place of traditional petrol, will provide a huge help to the Government’s ambitious climate target to reduce the UK's emissions by at least 68% by 2030

A small number of older vehicles including classic cars, and some from the early 2000s, will continue to need E5 fuel, which is why supplies of E5 petrol will be maintained in the super grade. Motorists are advised to use the new E10 vehicle checker see if their vehicle is compatible.

Motorists can expect to see the introduction of the greener fuel at petrol stations by September this year.